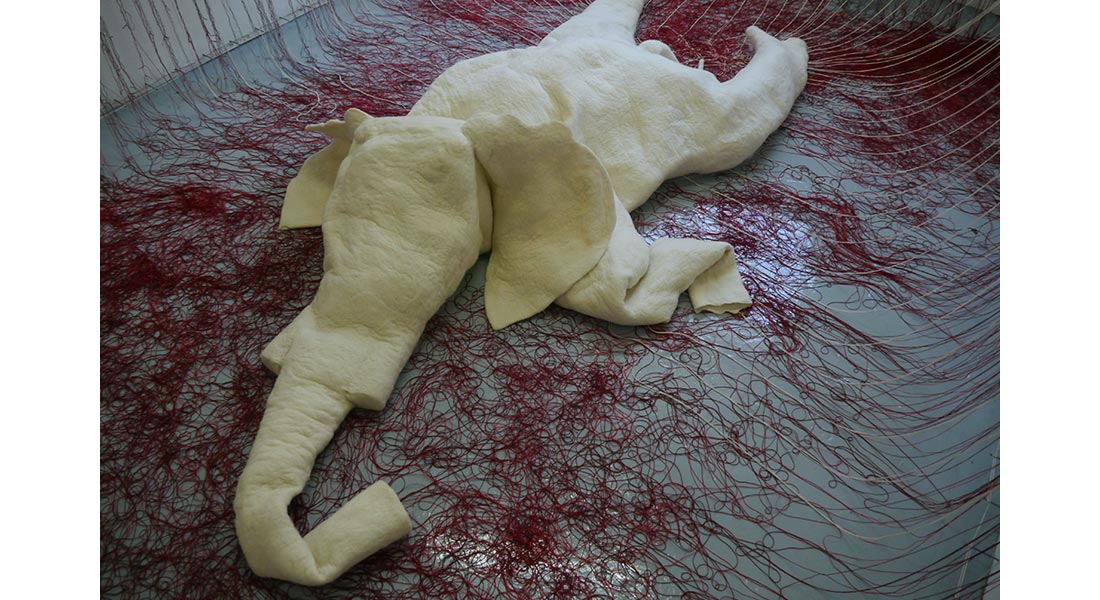 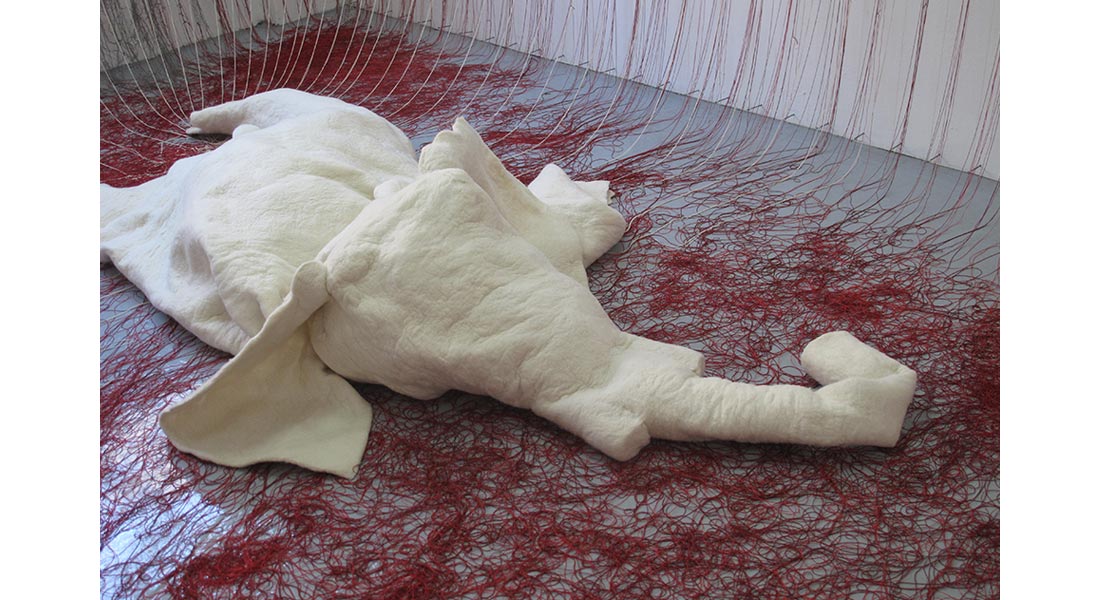 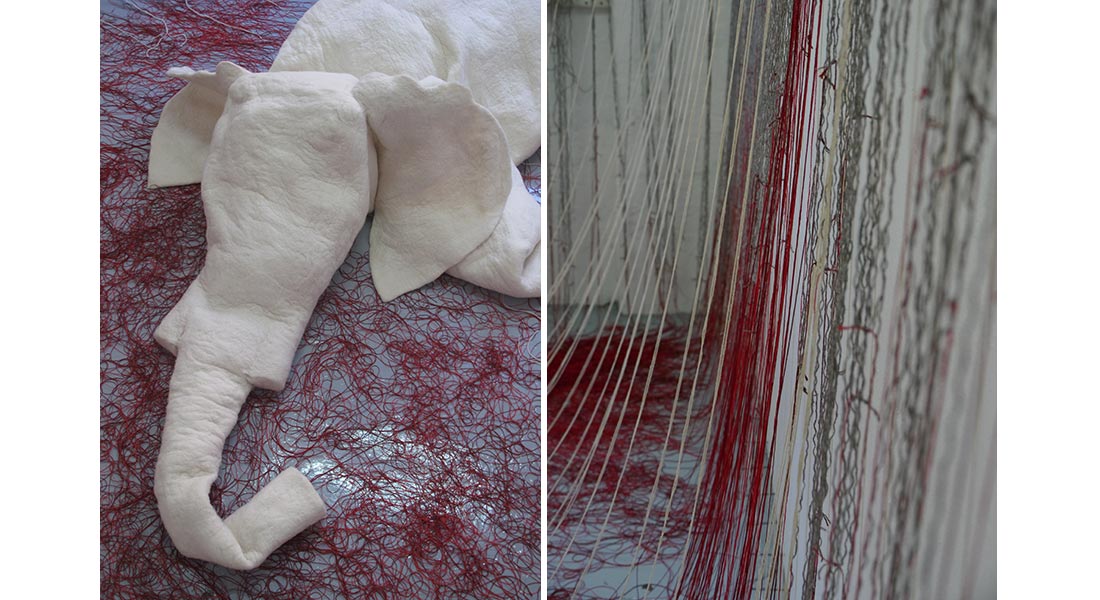 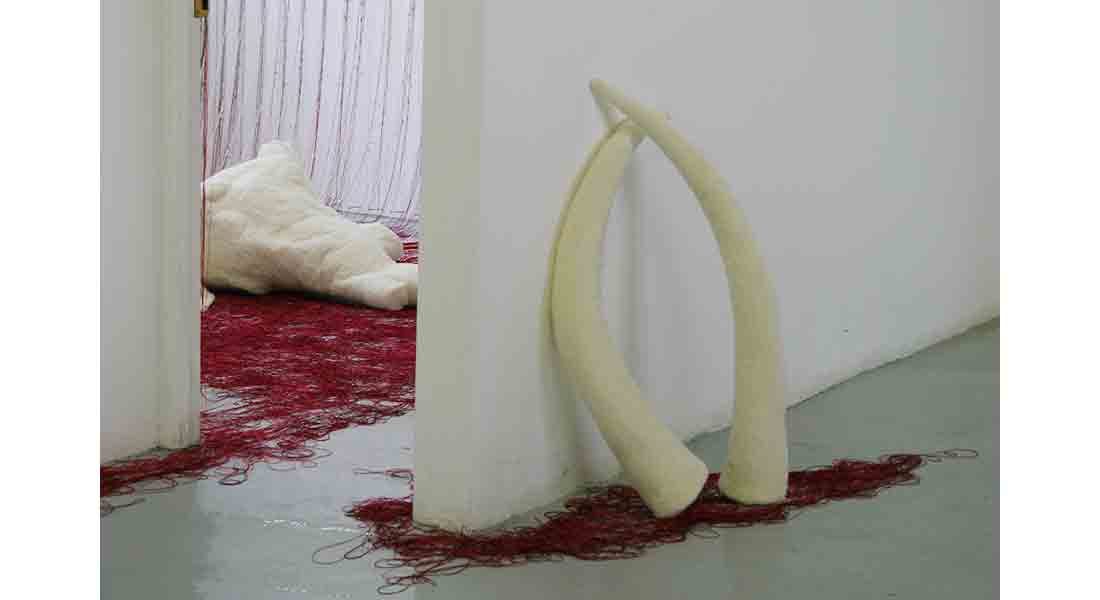 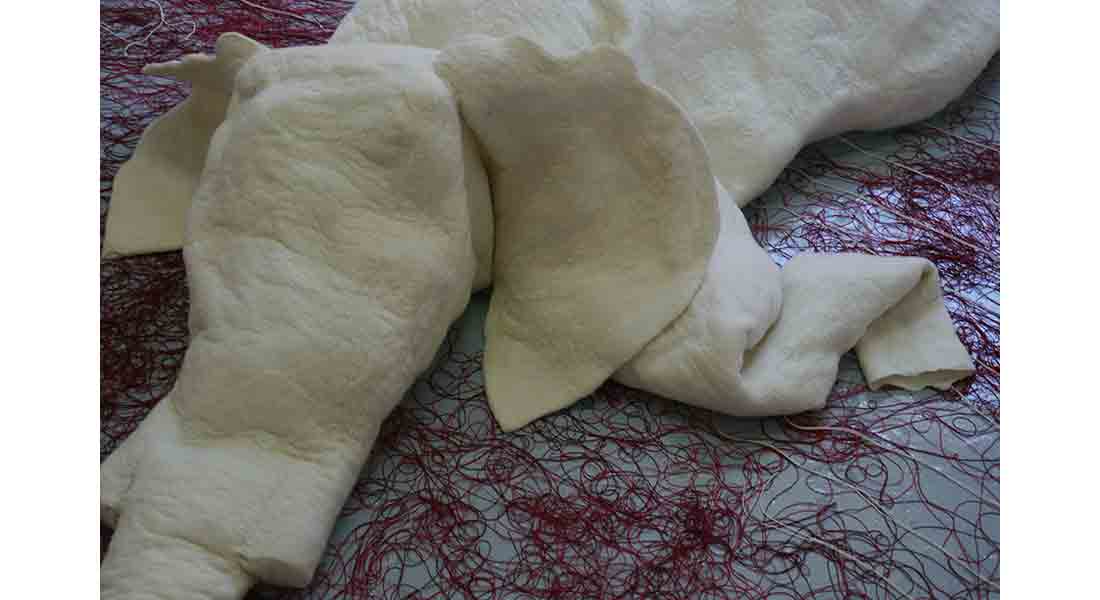 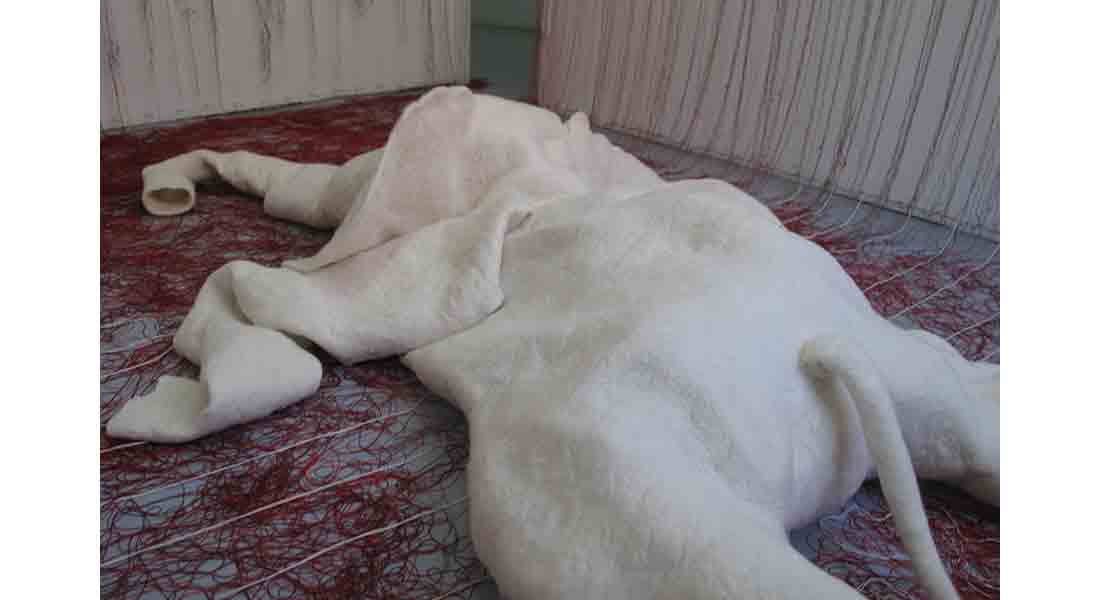 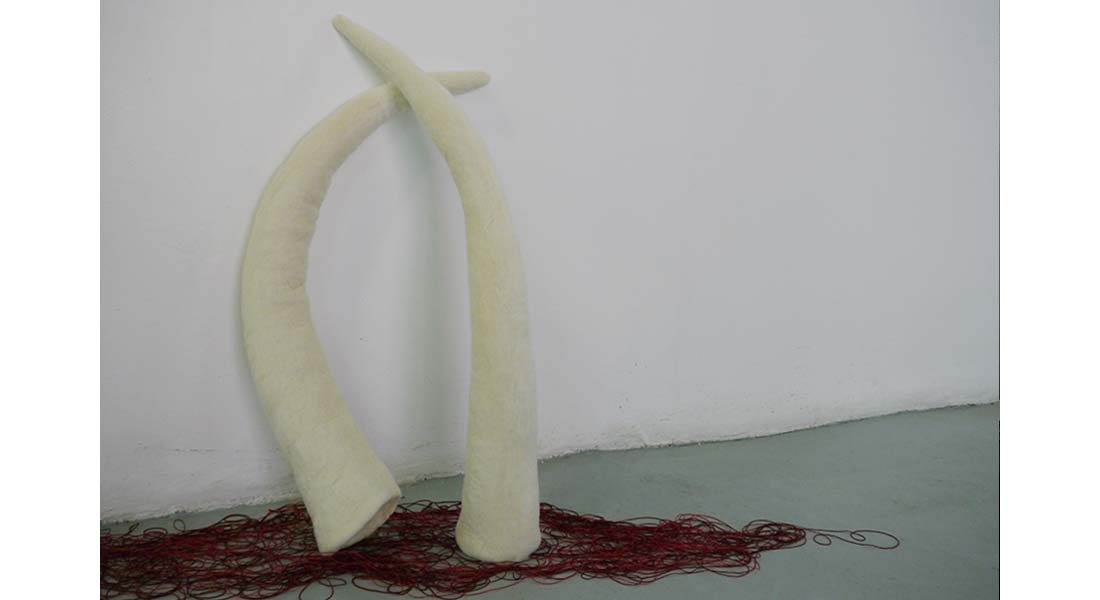 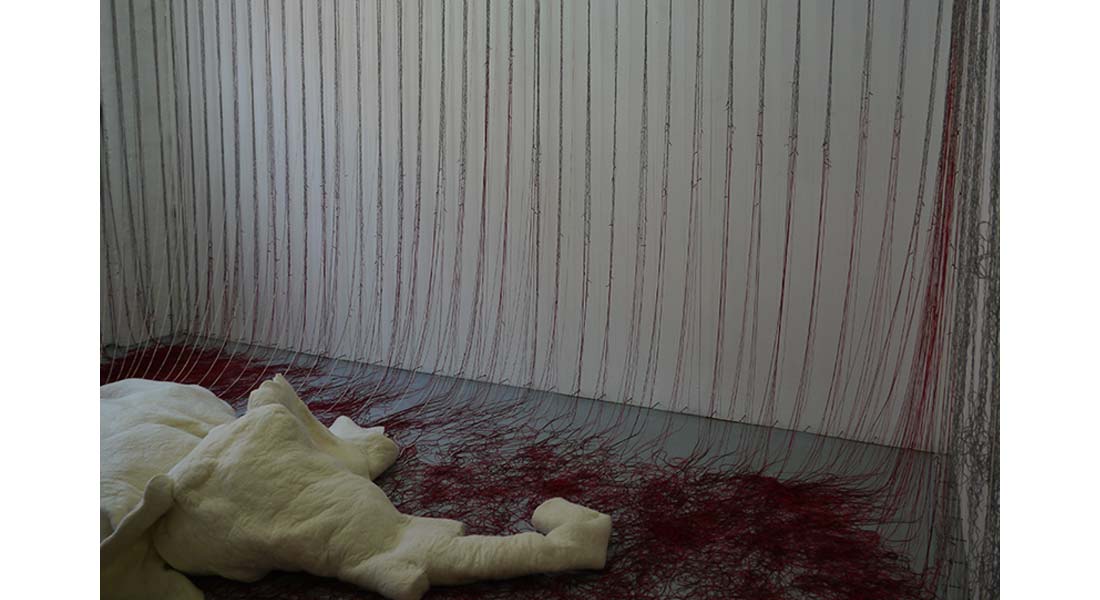 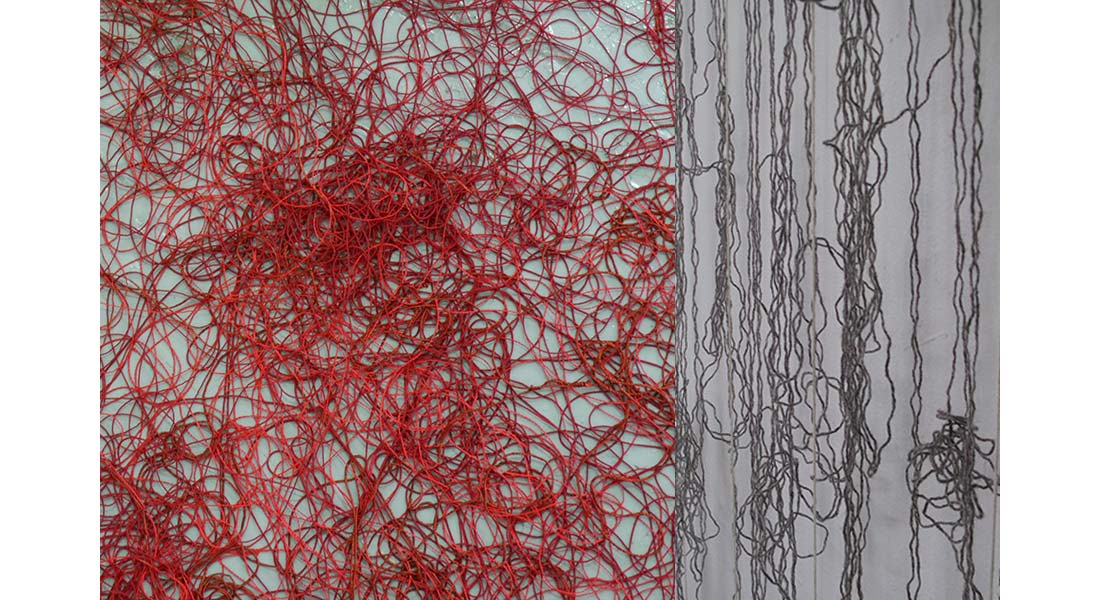 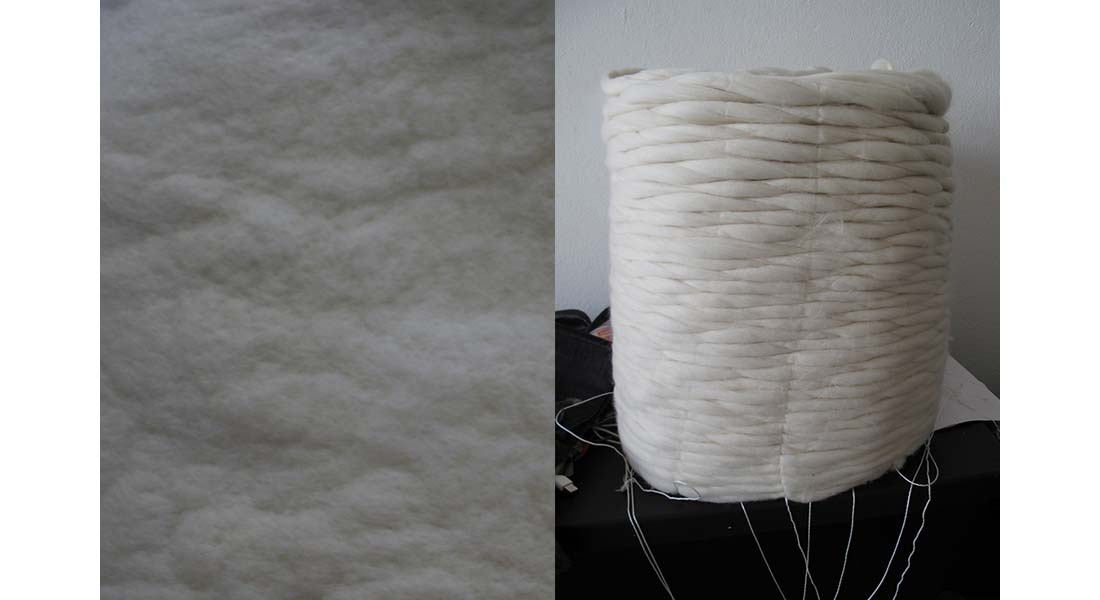 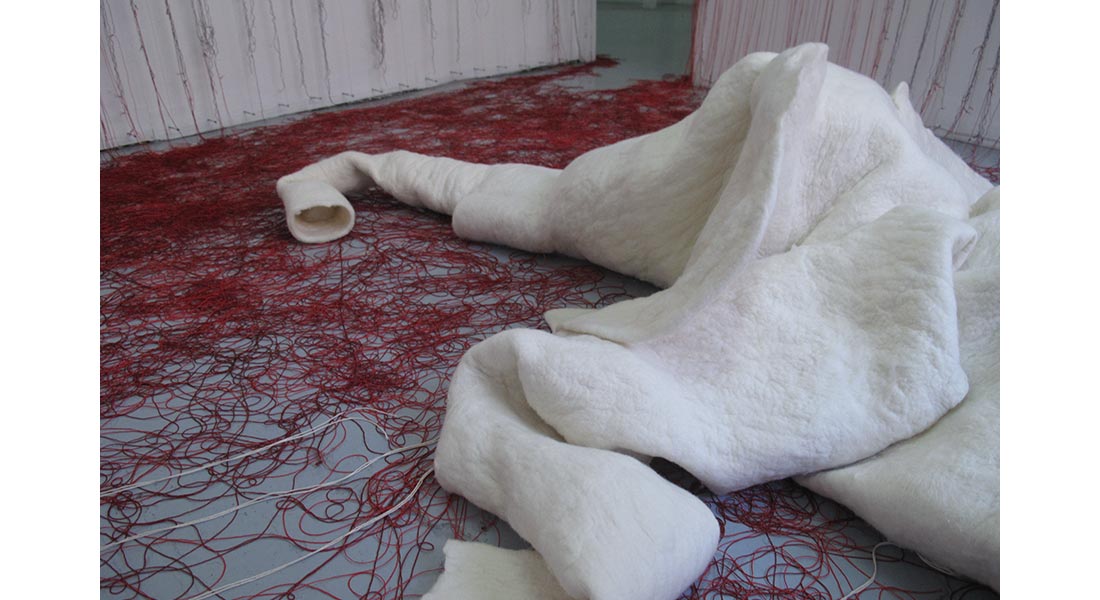 Using the idiomatic expressions “elephant in the room” (an obvious truth that is either being ignored or going unaddressed) and “white elephant” (a valuable but burdensome possession which is an honour to have yet is oppressively expensive to keep), Hovey explores the interdependence of people, land, and wildlife during a time when contemporary economic stresses, greed and financial incentives threaten to destroy the tenuous balance between them.

In this case the medium is also the message. Hovey’s installation is a
hand-felted sculpture referring to South Africa’s rich textile history. Unlike manufactured textiles, felting is a naturally occurring process that lacks a base structure. By exploiting the inherent properties of wool and applying friction and stress, an entanglement and bonding occurs that results in a strong, durable, protective material. If it becomes over-stressed and over-worked it loses the beneficial qualities. Hovey used this material and process to accentuate restraint, interconnectivity, and balance. In addition, the wool felt lying on the concrete floor references the wool felt mats prisoners were issued as bedding.

An elephant’s consciousness goes beyond mere survival instinct. They are peaceful by nature, they mourn, they possess empathy, and they remember, but they are also capable of force when provoked. By killing an elephant, humans are destroying beings of similar spirit and mind. The very cultures that hold the white elephant as sacred beings, in turn provide the financial incentive for their destruction – all to possess a religious artefacts carved from ivory or to be cured by a fictional medicinal remedy.

Despite their wisdom elephants can’t evolve fast enough to save themselves from extinction in the wild. As their destroyers, we now need to become their protectors. Currently our most effective means of protection is to imprison the elephants, yet we fail to question the death of spirit.

The white elephant is surrounded by walls covered with wool string that transition from an uncontrolled chaos, to streams of tears, to clusters that form bars. Each thread is tied to a red string, a sacred symbol of love and protection in Asian cultures. The threads cascade on to the floor to form a pool of red – the colour of mourning in South Africa.